A Writerly Farewell to Ned Vizzini 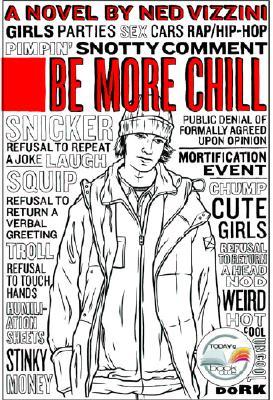 Writer Ned Vizzini took his life yesterday at the age of 32. News of this tragedy fills my Facebook newsfeed. The writer community I engage with reacts in the only way it knows how, groping for words to make sense of the senseless, offering heartfelt condolences, and writing memorial columns.

I look up Vizzini’s name, knowing it’s familiar but not knowing why. I see he’s a Facebook friend and a Goodreads friend, and I also see an unopened invitation sent several months ago to be part of the Ned Readers group. I then connect the dots and remember that I recently purchased one of Ned Vizzini’s books for my teenage daughter, Gwynne.

I had picked up Vizzini’s book a few months ago at my local indie bookstore. The first thing that grabbed me was the über-slick, graffiti-like cover design. This is an aesthetic I knew my daughter would dig! I then noticed that the author’s life story seemed fascinating. For instance, Vizzini began writing for The New York Press at the age of fifteen, and he had published his first book by nineteen. I marveled at these early successes and wondered about his life in Brooklyn (not yet knowing he had moved to Los Angeles), wondered if I might ever get the chance to meet him, wondered if he was an author to watch (not yet knowing he was writing screenplays in Hollywood), wondered if we had a Nick Hornby living just across the East River.

The book’s title, Be More Chill, resonated in a hip, modern way. It had a today feel and seemed to be the perfect antidote for what had become my Achilles’ heel: my colossal failure of an attempt to turn my daughter into a reader.

Distinct voices are rare, but my hope was that perhaps Ned Vizzini pulled off the unimaginable. Perhaps his creation of Heere would help my severely ADHD-inflicted daughter develop an appreciation for the magic of modern literature. Perhaps he had created a character memorable enough to make her relate to the world via the printed word.

After I found out about the death of Ned Vizzini and tried to process it, I went to our family room where Gwynne was on the sofa watching a YouTube video on her laptop. I asked her what she remembered about the book, Be More Chill. “Nothing,” she replied. I then pushed her a little, knowing that she had read it, hoping that maybe something had stuck. “I don’t know, Dad, something about a weird-ass pill.”

A weird-ass pill. I laughed, but only after pushing her further to see if maybe there was something else she could recall, something a little more profound but … nothing. She shut me down.

Hey, a weird-ass pill is better than nothing. She may not be able to articulate what she learned from the story, but it was something that possibly twisted the hardwiring of her brain and made her a different person. A better person. Who knows? Ned Vizzini may have made my daughter a better person.

This is how life works, isn’t it? When we desperately want to find meaning, we keep hunting and probing no matter how many times we’re shut down. And when we are left clueless and speechless by baffling actions and unspeakable discoveries, we keep knocking, seeking answers to larger and larger questions.

When someone dies young, we shake our heads, we mourn, we drink, we hug, we get angry, we fight, we hurt. Most of all, we hurt. And then we rip the scab off the wound, the wound that all senseless deaths leave behind. We let the blood trickle on the floor and we let it stain. We let the scar remind us that we are here to remember and honor life, to acknowledge the meaning behind every existence.

Yet still with Ned Vizzini we can’t help ourselves. We ask why.

Why would a successful writer with so much to live for take his life? Why does the human mind go to such a dark place and see no way out?

Of course we don’t know, but we ask why and every time we ask, we’re shut down. We’re left with silence. (And we don’t do well with silence.) When the writer community unexpectedly loses one of its own, it tears at the fabric of our place in this universe. Creative writers are fragile, restless souls and open, bleeding hearts. The sheer act of writing sometimes makes us laugh and cry. We’re that engaged with our language, our story. We don’t do well with small talk mostly because small talk doesn’t get down to the gist of what we’re here to accomplish.

Many creative writers know all too well about the darkness that haunted Ned Vizzini. We know all too well that there’s a grace to living and dying that seems to elude us because so much of life is out of our control. When fictional characters act out of character, we get it. We follow them wherever they may take us, but in life, we don’t do well with endings. Endings are hard. Endings, more or less, devastate us.

By all indications Ned Vizzini lived a meaningful life. His large, generous spirit leaves behind a dear family, the legacy of his work, and the nobility of his actions. I didn’t know Ned, but from what I’ve read about him, partly through his relationship with Nick Antosca, he was an influential artist and a loved human being.

The writing community will miss you, Ned. May you find peace and purpose in your new writer’s quarters.