On Location in NYC: The Harlem Tenenbaums

Perhaps the defining stylistic vision of one of this generation’s most celebrated directors, Wes Anderson, The Royal Tenenbaums is a film about family, nostalgia, and the intricacies of genuine connection: not concepts normally associated with New York City. So why is it that Anderson’s surreal, stylized vision seems like it couldn’t have taken place anywhere else?

The dysfunctional family of geniuses grew up on Archer Avenue in the film, but in reality, the Tenenbaum house stands on the corner of 144th St. and Convent Avenue in Harlem. Stepping off the train, it seems impossible that the Tenenbaums could have grown up in such a neighborhood, filled with pawnshops, 99-cent stores, and Metro PCS authorized dealers. But, upon further review, though the Tenenbaums were well off, they were not elitist. Though they were media royalty, they were not exclusive. The concepts of acceptance, experimentalism, and entrepreneurship are all quintessentially New York. The real Tenenbaum house stands on the corner of 144th St. and Convent Avenue in Harlem. (Photo: Matthew Di Paoli)

Upon first seeing the Tenenbaum house, it’s easy to be disappointed. Eli Cash’s (Owen Wilson’s) car has been cleared, the fence mended, no soft orange fixtures glow inside, outlining Richie’s (Luke Wilson’s) head-banded silhouette, and there is no pink flag waving in the breeze with the Tenenbaum “T.” But the reality is that the corner where the house resides is really an oasis in the middle of a frantic, ambition-propelled city. It’s an elegant block across from a small hospital with tall, husky honeylocust trees and a distinct sense of sanctuary. Very few cars pass by the dark scarlet brick and stone-laid staircase. In the end, it is a perfect spot to raise three geniuses, plus Eli, of course.

In an interview about the film in 2002, Wes Anderson, a native Texan, said that he’d “always wanted to make a New York film, because [he’d] always had a fascination with New York.”  He’d wanted to “create some sort of exaggerated version of that imaginary New York.” And so he did. And he occupied our consciousness with his sputtering, boxcar gypsy cabs, his soft-lensed, vivid color scheme, and his ability to convince the audience that they were somewhere even more real, even more unique to their own experiences than the reality they knew to be true. 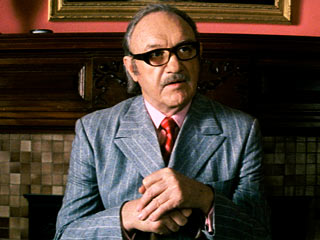 The second New York location Anderson uses in The Royal Tenenbaums is Battery Park. In one memorable scene, Royal and Pagoda meet there. In another, Ethel (Angelica Huston) and Royal (Gene Hackman) walk through the park reminiscing. This sort of poignant, sharply written section really defines what Wes Anderson’s films bring to the screen. It is an unapologetic romanticism with nostalgia, regret, and unadorned joy layered in. Anderson’s style paints an inimitable mirage of New York City that combines the sentimentality of an older, softer Manhattan with the fresh, stylized perspective of a younger age.

It is this unique sensibility that shapes his concept of New York into something generationally defining. In that same 2002 interview, Anderson said that he wanted to make something about “a family of quote-unquote geniuses, and about their failure and their sort of development as a family.”

But what is it that makes a film about mortality, about the inherent flaws of the individual so appealing on a personal level? When talking about his character, Raleigh St. Clair, Bill Murray said in an interview that we make “imaginary trophies” that “ trick you, [and] play on yourself so that you seem ok.” It is because we are safe inside those perfectly constructed, surreal confines of the Tenenbaum sensibility that the movie allows us, through its characters, to examine our own weaknesses with such honesty. And, really, who represents New York better than Margot Tenenbaum—an introverted, frosty playwright, chewing up men and spitting them out. In the end, it is each character’s earnest failure that makes the Tenenbaums come alive for us. It is that hint of redemption, the chance to start again. It is a film about death and the unbearable pain of loving someone who is impossible to love. It’s about indulgence, will, devotion, and most of all, it’s about coming home. And that’s what New York represents. No matter what happens to you along the way, you will always have your family. They’re right up there on the corner of 144th St. and Convent. And don’t forget to take a trip up to the roof to feed Mordecai. He knows, more than anyone, what coming home is all about.

Photo credits: Royal Tenenbaum (as portrayed by Gene Hackman), courtesy of This Movie Guy; Margot, Richie and Mordecai, courtesy of The Natalie Diaries.