Ah, summer. The time of year for lying on a blanket in the park with a good book, kicking back with a glass of iced tea, and reading. Unless, that is, you’re an intern.

This summer, Atticus Books is excited to welcome four interns who will support all aspects of our day-to-day operations, including editorial work, copyediting, publicity, marketing, social media, and brewing copious amounts of coffee for the staff. Over the next few weeks, we’ll introduce each of our interns.

First up, is Abby Hess, a rising senior at Susquehanna University in Pennsylvania majoring in creative writing with a concentration in editing and publishing. 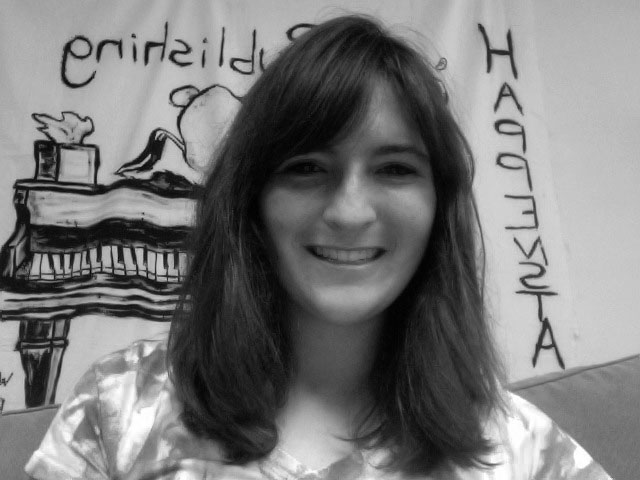 I have to say a book that isn’t a novel, CivilWarLand in Bad Decline by George Saunders. It’s a collection of short stories with a novella at the end. I don’t think I’ve ever had the urge to write something while I was reading as badly as while reading this book. I probably looked awkward, at the beach, holding the book open with one hand and trying to write on an Ampad without looking with the other. Eventually I gave up and just read the thing. It’ s just so weird, but you don’t question it. Everything is straight forward. His characters accept the strangest ideas and force the reader to also.

Pierre Gringoire from The Hunchback of Notre Dame is first shown standing on the edge of his play that is supposed to be shown in the Great Hall but keeps getting interrupted. Throughout most of the book he is a coward, scared of so many things, but the one thing he is sure of is his work. In other aspects I don’t know how similar we are, but I do agree that the one thing I would be able to stand up for would be writing. He realizes later that he has been selfish with his bravery. I think that’s something I have to constantly remind myself of, that courage isn’t just about proving yourself, but standing up for the people you care about.

I read The Hunchback of Notre Dame by Victor Hugo after my freshman year for a major project I was doing on classic monster stories. Not only have I used this book for over three other papers since then, every time I take another look at it I understand how important a book can be. How fiction can lay such important political, social, familial, and personal issues out on the table for readers to notice. After my first read, I told people just to skip the first hundred pages because it was later that the story started, but now I realize how wrong I was. If anything, read those first hundred pages. When Hugo talks about architecture, he means literature and art too. Plus the story has everything: the intelligent but crazed evil villain, the underdog hero, the love interest, the drama, death.

I used to (when I say used to, I mean until very recently) love telling people that I didn’t like The Great Gatsby, because it seems like most people do. I didn’t really find myself worrying for any of the characters or getting upset or excited from the events. But I read that my senior year of high school in a class where most of our discussion included drawing the setting in crayons on giant rolls of white paper. It’s a book I know deserves a second or third read.

Partitions by Amit Majmudar came out in August of last year. It’s a beautiful book about the Partition of India with very poetic language but a fantastic plot that moves in and out from three stories told from the perspective of a father who is dead. I had a hard time describing it to any of my friends without them saying, “Oh, so it’s like Slumdog Millionaire?” For the actors, I’m not knowledgeable of the best Indian actors of today, so let’s say an Indian version of Gary Oldman for the father and someone like Adrian Brody for the Doctor in the story that the father follows.

I kept changing my mind. For a long time I wanted to do the voices for cartoons, probably because it’s what Robin Williams does in Mrs. Doubtfire. It was in eighth grade at a Junior High Awards ceremony that I said I wanted to be an author. I remember expecting my parents to be shocked and talk me out of it. They weren’t and they didn’t.

Yes, it’s a tie for me between fiction and creative non-fiction. I have nothing against poetry, I’m just not as good at it. I’m in a Slam poetry club at school and they are nice enough not to laugh at me too often.

expanding the page
formless, open, ideas
sharing this with you

It’s ok, you can snicker.

I’m just starting The Truth Book by Joy Castro. She read an excerpt from it at my school this past semester and the voice really stuck with me. As it says on the cover, it’s a memoir of “escaping a childhood of abuse among Jehovah’s Witnesses.” It’s a book, I think, that could have been published just because of what happened to her, but within a sentence your realize that she is also a great writer, and that this won’t just be sad, it will be cutting.

I was wading through internship possibilities for hours. I looked at small presses, big presses, lit mags, newspapers, and online magazines. I got to the point where I was sick of reading the same two voices over and over. One was monotone, describing how I would copy and file and eventually, maybe, be put on a project. The other was an overly sweet voice asking me if I liked makeup, fashion, and boys, [and if so], then I would be perfect for their online mag. Right away I got excited clicking around the beautiful Atticus Books site. Their post for interns actually had a personality–one that I admire.