PRAISE FOR THE LAW OF STRINGS

“[T]his story collection hooked me from story one and continued to captivate to the end. Expert dialog and movement and resolution in each piece…This is a book you could read in a sitting or two. The pace is that swift; the stories are that good.” 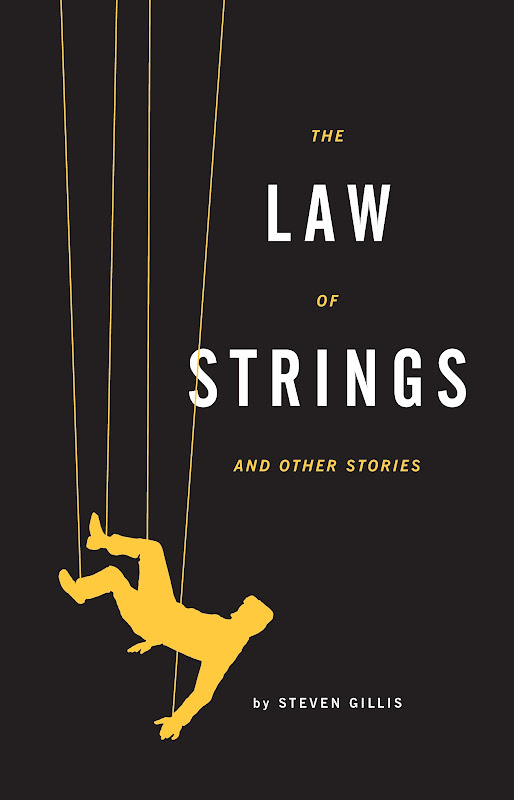 KENSINGTON, MD — Steven Gillis is a fixture of the contemporary indie lit scene. The publisher of independent powerhouse Dzanc Books and the founder of 826michigan, part of the national youth writing workshops started by writer Dave Eggers, Gillis admits that finding a balance between constant multi-tasking and sleep is a refined art. He adds, “Or maybe I’m just a shark and will drown if I stop moving.”

The Law of Strings (Atticus Books, $14.95, Summer 2012), Gillis’ sixth book and second collection of short stories, is an existential yelp examining individual choices and our all-too-human response to unexpected events. Fans of George Saunders and Aimee Bender will delight in Gillis’ surprising surrealist twists in the heart of painfully real emotion and interpersonal relationships. From a tightrope walker abandoning his trade to an Immovable Girl learning to levitate, The Law of Strings explores what happens at the crossroads in our lives and how we decide what matters most in a world defined by chaos.

Gillis says he approaches short stories in “rapid succession” and “always follows [his] gut.” For this lawyer turned publisher turned writer, gutsy risk-taking is at the core of his personality and spills into the lives of his characters, who frequently make decisions with shattering consequences. Unlike many flashy, contemporary novelists sparring publically on Twitter or hovering in billboards over Times Square, Gillis prefers to let his writing speak for itself.

A former labor lawyer in Washington, D.C., Gillis returned to his home state of Michigan in the early ’90s to dedicate more time to writing fiction. The rest of the story for this self-proclaimed “man behind the curtain” reads like a romanticized version of every writer’s dream: Gillis published four books, started a non-profit publisher for niche market literary writers ignored by major presses, and embedded himself in his local community by bringing writing workshops to city youth. “Community is everything,” Gillis says. “I just feel it’s important to do something positive for those around you. It’s really as simple as that. If you aren’t making someone else’s life better, what are you doing?”

ABOUT THE AUTHOR
Steven Gillis is the author of Walter Falls, The Weight of Nothing, Giraffes, Temporary People, and The Consequence of Skating. His stories, articles, and book reviews have appeared in over four dozen journals, and his books have been finalists for the Independent Publishers Book of the Year Award and the ForeWord Magazine Book of the Year among others. A three-year member of the Ann Arbor Book Festival Board of Directors, and a finalist for the 2007 Ann Arbor News Citizen of the Year, Steve also founded 826michigan and is the co-founder of Dzanc Books. Steve taught writing at Eastern Michigan University for three years.

ADDITIONAL PRAISE FOR THE LAW OF STRINGS

“Very few writers would dare explore, in a collection of stories, the intersections between quantum physics and everyday ethics, between cosmic law and domestic habit; fewer still could make those intersections so compelling and surreal and surprising, and could make the pages sing by so quickly; only Steven Gillis can provide just this bracing combination of thoughtfulness and spiked wit and deadpan finesse. The Law of Strings is a revelation—strange, barbed, and original.”

– MICHAEL GRIFFITH, author of the novels Trophy, Bibliophilia and Spikes

Atticus Books is a publishing house based in the Maryland suburbs of Washington, DC that specializes in genre-busting literary fiction. Atticus is run by founder and publisher Dan Cafaro and assistant editor Libby O’Neill. Visit us on the web at https://atticusbooks.net/.