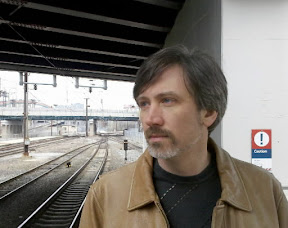 KENSINGTON, MD — John Waters might be Baltimore’s most famous resident and “The Wire” may serve well as a seedy introduction to outsiders, but Baltimore was noteworthy long before “Hairspray” and David Simon. Creative types have used Baltimore’s rich literary history and colorful characters in their work for years. Now local writer Eric D. Goodman gives the city’s homes and haunts a moment in the spotlight.

From Fell’s Point to Federal Hill, Tracks re-discovers the heart of Baltimore’s diverse neighborhoods and include local sites like the Red Brick Station, the playground atop Federal Hill, Hotel Monaco, Baltimore’s Holocaust Memorial and the American Visionary Art Museum that give the novel a realistic and regional feel.

Goodman, a writer and frequent guest on WYPR, says he originally “thought I was just writing a few unrelated stories.  But they all happened to involve trains. I’ve lived in Baltimore for more than ten years.  I wanted to set Tracks in real places that people could recognize or visit. The train, however, is the most important setting—a character itself.”

The release party for Tracks, which is published by the Maryland-based independent press Atticus Books, is on September 27 at Max’s Taphouse, featured in Goodman’s book. “Max’s Taphouse is Baltimore’s best beer bar,” Goodman explained. “Besides, one of the stories… is called ‘A Good Beer Needs a Good Stein.’  A book with a story title like that belongs in a good beer pub.”

Goodman also will be making two appearances in September: He performs a reading at the Janice Holt and Henry Giles House in Knifley, Kentucky on Saturday (Sept. 17) and next Sunday (September 25) he will be at the Baltimore Book Festival discussing linked stories with Susi Wyss (The Civilized World) from 3 to 4 p.m. on the CityLit Stage in Mount Vernon, Md.

ABOUT THE AUTHOR
Eric D. Goodman’s work has appeared in The Baltimore Review, The Potomac, Grub Street, The Arabesques Review, and New Lines from the Old Line State: An Anthology of Maryland Writers, among others. Eric is the author of Flightless Goose, a storybook for children. Tracks is his first novel.