Editor’s note: This is the second in an unspecified number of quasi-poems related to Rhinos, writing and death. To read Parts 1 and 3 of the Rhino series, click here for Part 1 and here for Part 3.

I was almost about to call this
Why I Write, Part II
But fortunately for all, I have decided against it.

I hate sequels. I hate trying to type a new twist on a tired idea.
Where’s the steamy sex scene? (I almost said, “Rhino,” but thank Gilligan, I refrained.)
I am not mad I am only wondering why this man walking past my bookshop with a cane, cigar, a sombrero, a white beard, a long overcoat and dark glasses decided not to stop in.
He thought he might like to (no, I am not omniscient—this is life and I’m just guessing here)
And then decided against it.

He could have been death masked as a man
With a cane, a cigar, a sombrero (or some other type of hat—I’m not very good with hat types, damn it), a mostly white beard, a trench coat and dark glasses.
The cigar was lit and death would definitely smoke, don’t you think?

Now why do I know that the old lady across the street with some kind of kerchief covering her ears with polyester slacks, a white unfashionable jacket and beat-up sneakers is most certainly
Not death?
She couldn’t be, right?

And then there was just this guy who walked past with a goofy expression, a sailor’s cap of some sort and a long stride who most certainly was
Not death.
He couldn’t be, right? (I promise not to be repetitious again. Remember, I hate sequels.)

But the guy with the dark shades, the one who wore a blank expression—he might be.
There’s a chance, right?

Now there’s this other guy who is always carrying something—a bag of some sort—with a baseball cap on—a younger guy. He has a beard. He looks homeless. Unhygienic. Always walking. Wandering.

I’m not paranoid of death. I just wonder what he might look like if he were to appear in my bookshop. I doubt he would look like a little boy or young girl. But there I go following those pre-conceived notions of what death should look like.

I always think of Bergman’s The Seventh Seal. That’s what I picture. A chess match between Max Von Sydow and Death.

So unoriginal am I, that’s all I see—
This black-and-white depiction
of a stark pale, dark-eyed man
in an all-encompassing cloak,
moving a pawn,
laughing sinisterly,
As brought to us by the silver screen. 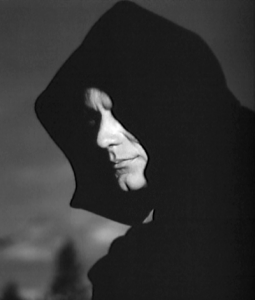 What’s wrong with this picture?

There’s no death outside, lurking around the corner, waiting for me. Not on a day like today. It’s spring almost. After a crummy, brutal winter. It’s spring almost. I’m young. I’m 29. I’m almost 30. It’s the spring of my life. I can die tomorrow of some hell disease. Not today.

Now death might be waiting for those two old ladies who just walked past across the street. They looked old and they looked like they might be expecting him. They were helping each other sum up the courage.

Or perhaps this Coca-Cola truck that just pulled up is really delivering bottles of something other than a dark, peculiar tasting liquid that everybody drinks and pretends to like. But that’s for Stephen King to decide.

What really gives me a lift is knowing that this is not a sequel to “Where’s the Rhino?”
(God knows I tried, anyway).
God knows that I have faith that he knows that.

God knows what the heck (oh, what the hell) I was aiming for when I wrote this trash.

God knows I believe in him but he also knows I have my moments of doubt. And shame.

God knows I am happy this wasn’t a sequel.

God knows where the Rhino is. He’s just not telling me.

God knows I’d rather be writing something else right now.

God knows why I write.