Prologue
This lyric was my gut-jerk reaction to Neil Young’s 2006 CD and title track, “Living with War.” Four years later, and dammit to hell, I’m not sure I’d change one reckless word. 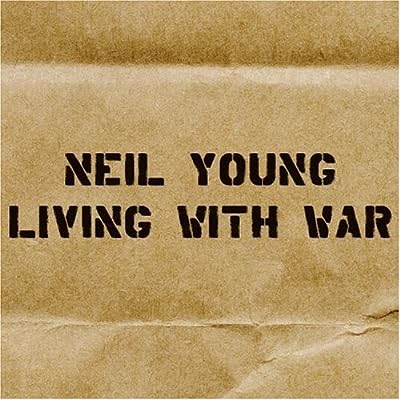 I’ve got childhood friends with blue-collar values
Who forgive their sugar daddy’s white-collar crimes.
They support wartime generals on the take
As long as they cancel out the five-star traitors who dare to say,
“If America the Powerful breaks it, then we gotta fix it.
If our great country creates a ripple and cracks the surface,
By gosh by golly by gee, by the godforsaken land of Saddam,
We own the whole bloody mess.”

Oil doesn’t mix too naturally at a social function,
Unless it’s a high school dance of dumbbells, death and destruction,
With quail hunters and drug lords who could appreciate a lethal toxin,
It’s really the only way to keep up an honest-to-goodness front.
A soldier reaches for his rifle and finds a hole where his heart was.
A drummer bangs on his snare and hopes to fill his share of the gap.

I’m too young to remember this horse of an all-too similar color,
But hell, I’m too crazy to kneel and bear it all the same.
I remember hearing Neil sing about Four Dead in the Buckeye State,
Now I’m wondering whether that was just a dress rehearsal
For these times when you have to be careful of what you say.
When you have to hesitate to sing about freedom, then clearly we’ve got a problem.
Gone are the ‘80s when we snorted our issues and repaired the future one line at a time.
Now we sort and prioritize our issues and prepare and despair our future one lie at a time.

I’m drinking my 25-dollar bottle of wine and smoking on my Cuban cigar,
I’m thinking that maybe my lifestyle isn’t conducive to singing protest songs,
I could be wrong but I probably should keep my pie shut and order a second slice,
Dessert in the desert is better by far without a congested conscience of sugar and spice.